I figured it is about time I spent some time here creating the backstory for you. My name’s Chris Bement, I’m a 35 year old male in the USA. Back in 2011, my wife, Laura, and I became pregnant, while I was on my first “bulk” (which means, eat mac and cheese and cereal in addition to all of your meals and get fat). Prior to this, I had never been particularly muscular, but also never particularly fat. I had followed scooby1969’s advice for a while, as well as some strength programs such as stronglifts, but nothing really groundbreaking and with no great consistency.

The goal at the time was to get up to 200 pounds and then “cut”, though I didn’t actually know how to do this, I was following some random forum member on an old strength forum I used to frequent. At the time I was following the 5/3/1 (original template) program by Jim Wendler, because the internet had convinced me that aesthetics were not my goal and I should be super strong! I had to be a powerlifter, although I had no desire, really, to be one at the time. 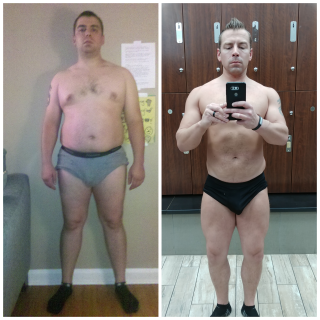 Anyhow, I hit my goal of 200 pounds, and we found out we were pregnant around the same time. That’s when all metabolic hell broke loose. My beautiful 5 foot 2, 98 pound wife can basically eat whatever she wants without gaining a pound. So, we went on the pregnancy diet, which meant Chef Boyardee canned ravioli and ginger ale, both of which were always on sale somewhere for 10 / $10.00. What a steal.

So I got fat. I probably made it to around 235 pounds in the ensuing 8 years. Perhaps higher, I stopped weighing myself, and I stopped taking photos because I just didn’t want to look at myself. It meant I would have to accept the fact that skinny Chris was obese.

So throughout this time I experimented with various approaches to weightroom-focused ketogenic diets. From those prescribed by T-Nation’s Christian Thibodeau, to Chaos and Pain’s Jamie Lewis (the Apex Predator Diet), to Ketogains TKD and CKD protocols (not crediting ketogains with creating those protocols, just with promoting them as mainstream).

Using 5/3/1 and later using Jamie Lewis’s “Destroy the Opposition: Advanced Squat Specialists” program, I managed to get my powerlifting gym total up over 1000; 225 bench, 385 low bar squat, and a 405 mixed-grip deadlift. After that I fell out and gave up, and also got a new job and stopped being unemployed.

So, I took some years off again. I ate whatever, I didn’t train. I made myself fat again, and always felt like shit.

Bring about 2016. In August of 2016, I was supervising a job, having drunk 6 IPAs the night before. I was completely miserable, and I had no idea why such a small amount of booze was causing me the worst hangover of my life. For the first time ever, I chose to quit alcohol for good (and I stayed quit, I can count on one hand the number of drinks I’ve had since that fateful day). This was the first step in regaining my youthful health, and I did indeed feel better for the rest of that year. But that winter, I was still not liking how I looked and felt.

In January of 2017, I listened to an episode of the Joe Rogan podcast, where he interviewed Rhonda Patrick – I had already heard Joe was keto, and he spoke so well about it that I was pretty well set on getting back there at some point. And I had even been intermittent fasting just out of habit (though, without any fat loss). Rhonda turned me on to one-meal-a-day fasting. And explained it so well that I had to give up my processed, frozen foods diet and try something new.

So I went to the grocery store and bought up a ton of sausages, cheddar cheese, some yogurt, and the ingredients for a wicked kale shake (thanks a lot, Joe Rogan).

Throughout the early winter and spring of 2017, I ate one meal a day, which was lunch at work. It consisted of 5 to 6 links, a pile of cheddar, a cup or two of Greek yogurt, and a massive, grassy, kale shake.

I managed to diet down from over 235, to about 175 pounds by July. And during that time I scoured the web for more information on fasting. I found out about the ketogenic forums, about Dr. Jason Fung, and about the fasting subreddit.

One day I was on the fasting subreddit, and there was a post discussing post-fast diet. I had been experimenting with 2-3 day fasts by this point and was a staunch keto zealot. But someone in the comments of this particular post happened to link to r/zerocarb.

This is where I tripped and fell into the carnivore rabbit hole. I read testimonials and scientific data from Amber O’Hearn, the Bear (Owsley Stanley), Vilhjalmur Stefansson, Charles Washington, and the like. I heard stories from Kelly Hogan, Joe and Charlene Andersen, and Shawn Baker.

So, right around my birthday, July 13, 2017, I became a carnivore. Forever. I recall my parents taking me out to Texas Roadhouse, choosing my ribeye, and the waiter’s uneasy look when I told him to keep the sides.

By October of 2017, I was still fasting weekly, but also started working out at home doing pullups (now that I was lighter) and using a kettlebell. But this only got me itching to get back into a squat rack. So I joined the nearest commercial gym (non-planet fitness, mind you) to my office, which happened to be the Edge. And I began to get started rebuilding my base. I was there every morning at 5 am.

In November, on Veteran’s day, I had an accident. I cut my ring and pinky fingers on my right hand with a steak knife while washing the dishes. I managed to sever one tendon in my ring finger, and two tendons in my pinky. I had to have urgent surgery to repair them, right around Thanksgiving. I recall still maintaining diet. And for dinner that holiday, I ate a drumstick.

So I had my surgery, and began PT, and by January of 2018 I had recovered enough to be released back to the gym. At the time I could only do 3 pullups without straps, due to my greatly-diminished grip strength. But I vowed to do better (and did).

Since then I’ve hopped to a few different programs, first toward strength as I was used to, but then started to lean more toward aesthetics, toward muscle hypertrophy. Toward looking jacked as fuck. I tried out PHUL, then PHAT (these are some intermediate bodybuilding programs, you can look them up and use them for free on the web). And am currently using a custom program based on some of Pavel Tsatsouline’s principles of irradiation (but geared toward being large).

I decided I needed a goal to work toward, so currently my plan is to step on the natural bodybuilding stage sometime next year or the year after, depending on just how big I can get by 2020.

Right now I am performing my first test “cut” as a mock contest prep. My current weekly menu consists of a single meal of ground beef, 22 oz. It’s approximately 90/10 ground beef. I needed to keep the calories as low as possible but keep the protein as high as possible. So far since January 14, I am down 20 pounds and looking leaner every day. I started to notice new striations in my shoulders this morning, which made me very happy.

Anyway, that’s the abbreviated version of my trip through health so far. I have been a carnivore for a year and a half as of this month, and I have never enjoyed better health. I hope you’ll all share your stories with me when the time comes. Thanks for reading.

2 thoughts on “About the Author: My Brief Dietary History”

Please consider donating if you’d like to help me continue to reach more and more people.